This week’s Articulate challenge was to create a training video using a mobile device.

I decided to make things a little harder for myself than they needed to be and did two very silly, but fun things:

I used my floor, an ottoman, some Harry Potter books, and a cool little gadget meant to hold your phone upright. Oh and a pen.

A couple of different iterations of these items made for various camera angles. Since this was all done with my phone, I couldn’t take a picture of my phone in the set up. But, it was placed on the blue and white stand each time. (Edit: the 4th picture below I took with my iPad and added now that I am back at my desk.  The phone just sticks to the blue mat!)

I filmed this in my office which has a great window with natural light. That was it! It did create a few weird shadows but I hate fooling with lighting so didn’t care enough to fix that.

My cat, Roux, decided she wanted to help. Rather than shutting her out of the room or doing a bunch of takes, I just incorporated her into the video. Besides, cats are necessary for any video on the internet, right?

Speaking of takes, I only had a little video I wasn’t able to use on the first try due to me making folds in the wrong place.

Here are some cute pictures of Roux:

I used iMovie to edit my clips and add titles since it’s what I had already installed on my phone. It wasn’t too tough to pick up since I had used the desktop version before. In fact, I managed to do most of the editing while sitting on the metro on my way to meet some friends for happy hour. iMovie even includes some free background music, which is much more pleasant to listen to than paper being folded.

Once everything was ready, I just uploaded it to YouTube straight from the iMovie app. Easier than folding an origami box!

So, check it out! My totally mobile-made how-to video.

A few editorial notes on this post, now that I am back at my desktop computer and tweaking the formatting.

I think this challenge really shows how easily and inexpensively smartphones and tablets can be used to create video for training.  In fact, several years ago when I was at the Girl Scouts, we created a short training video using a smartphone and posted it to YouTube.  It was quick, easy, and effective.  This won’t be the most high quality video, but sometimes that just doesn’t matter as long as there is ample lighting and a good script.

If I weren’t doing the editing on the go, I would have used voice over instead of captions for the directions.  I think that watching the folds is important and having to read the captions takes away from this.  It would also allow for slightly more detailed directions. 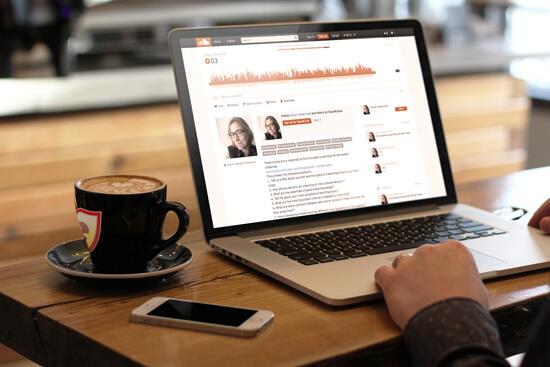 I am jumping back in to the Articulate eLearning Challenges this week!  David has asked us to do a short interview with ourselves, answering the following 10 questions:

1. Tell us a little about yourself and the types of e-learning projects you most enjoy.
2. How did you become an e-learning or instructional designer?
3. What are the essentials of good e-learning design?
4. Tell me about your most successful e-learning project.
5. What are the most important criteria in evaluating e-learning?
6. What are some common mistakes new course designers make & how can they avoid them?
7. How is designing mobile learning different than designing for the desktop?
8. How do you evaluate whether your course was effective?
9. How do you keep up your skills and stay current in the industry?
10. What is the future of e-learning?

A little about my process:

Script: I didn’t fully script out my answers, but I did consider each question and make some notes for myself before starting.  I find that when recording audio for eLearning I prefer this method unless there is a specific script I need to follow.  When I do have a script, I always read it out loud a few times to note any phrases that feel unnatural and try to edit those if possible.

Hardware: I almost always use a Logitech headset for recording. It’s comfortable, easy (it’s always plugged in to my computer), and produces a pretty good quality sound.

Software: I recorded each answer as a separate track in Audacity and used the noise removal function to minimize any background buzz the headphones didn’t cancel out. I only allowed myself one take for each answer as I didn’t want to sound scripted and wanted this to be an honest reflection of where I am at this moment. (I did have to start one track over after some crazy dog barking started a few seconds in… the perils of working from home while being married to a professional pet sitter!)

Sharing: Once everything was recorded, background noise was removed, and I had exported the files, I uploaded them to SoundCloud so they could be embedded here.

That’s it – the whole process took less than 30 minutes.

You can listen to my eLearning story using the player below.

I hope you take a little time to share your story as well!